Parish churches dedicated to a Celtic saint are usually older in their foundation than churches dedicated to Biblical saints.  The church in Ashprington on its hillside shelf is no exception.  Although nothing today is older than the late red sandstone Norman font it is probable that a church of some sort existed in its commanding position.

Enclosed by ‘God’s acre’ with burials going back to the Middle Ages St David’s has a fine tower dating back to the end of the thirteenth century.  It is unusual for Devon; its slender form of four truncated pyramids with no buttresses is more typical of north Cornwall.  A small group of similar towers centred on Tintagel show a strikingly similar design and workmanship.  The little church at Trevalga could have been built by the same early mediaeval craftsmen.

There is no screen separating nave from choir.  It was removed in mid Victorian times having fallen into disrepair.  The twin carved screen doors, unusually in their original late mediaeval paint, can be seen displayed at the Royal Albert Museum in Exeter. 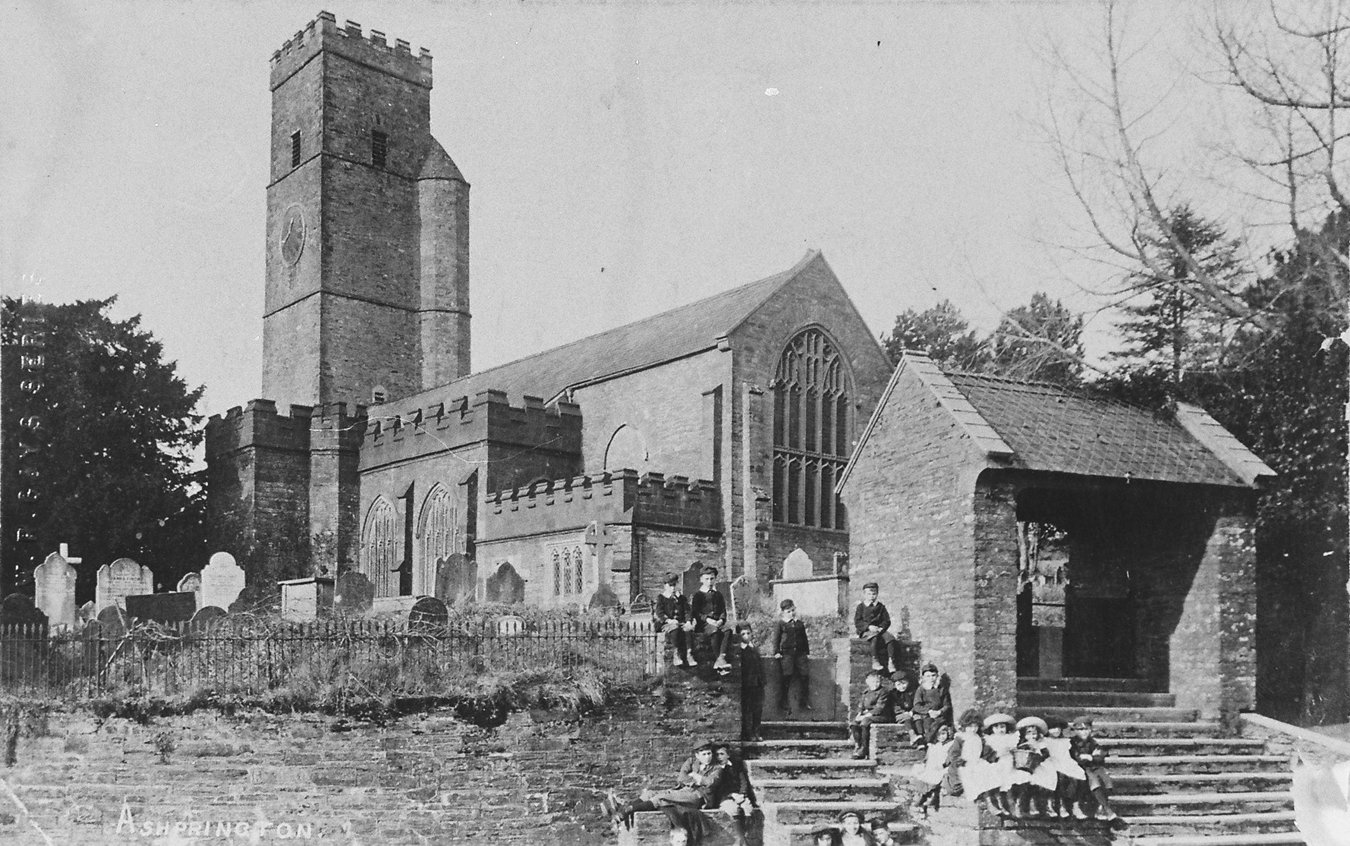 Church and lychgate with village school children, circa 1905.

There are some fine monuments on the walls of St David’s which are shown to advantage against the whitewashed walls.  The Kellond or Kelland family of Painsford are well represented by a fine late seventeenth century monument on the north wall.  In the sanctuary there was a slightly later Kelland monument that fell off the north wall in 1962, bounced off the altar and would have flattened the Rector had it fallen a few hours later.  The remarkable medallion beneath it was lost or stolen during the 1970s and bought a few years ago by the Royal Albert Museum.  It is on display there today for all to see again.

The copper clock face on the south side of the tower is considered too large for its setting and could have been intended for another, larger tower.  The clock, by Wasborough Hale of Bristol dates from 1846 and is still wound by hand every Friday.

The interior of the church is light and airy, benefiting largely from absence of stained glass windows.  The arcade dates from around 1450 and has some good capitals.  There is a particularly fine green man, with eyes unusually closed, on a capital on the north side near the now blocked ‘devil’s door’.

The windows with their clear lights were rebuilt in the 1840s in Bath stone.  All the windows were restored again in 2015/2016. The east window above the altar is Victorian and contains scenes from the life and crucifixion of Christ.

Another of the glories of the church is its woodwork which is considered to be some of Herbert Read’s best work.  The pulpit is modelled on one from Kenton church dating from 1485 which was restored by Read in the early twentieth century with some of the missing pieces found by Baring-Gould.  The choir pews, parclose screens and sanctuary panelling lead the eye to the magnificent reredos with its carved figures of early saints and bishops. 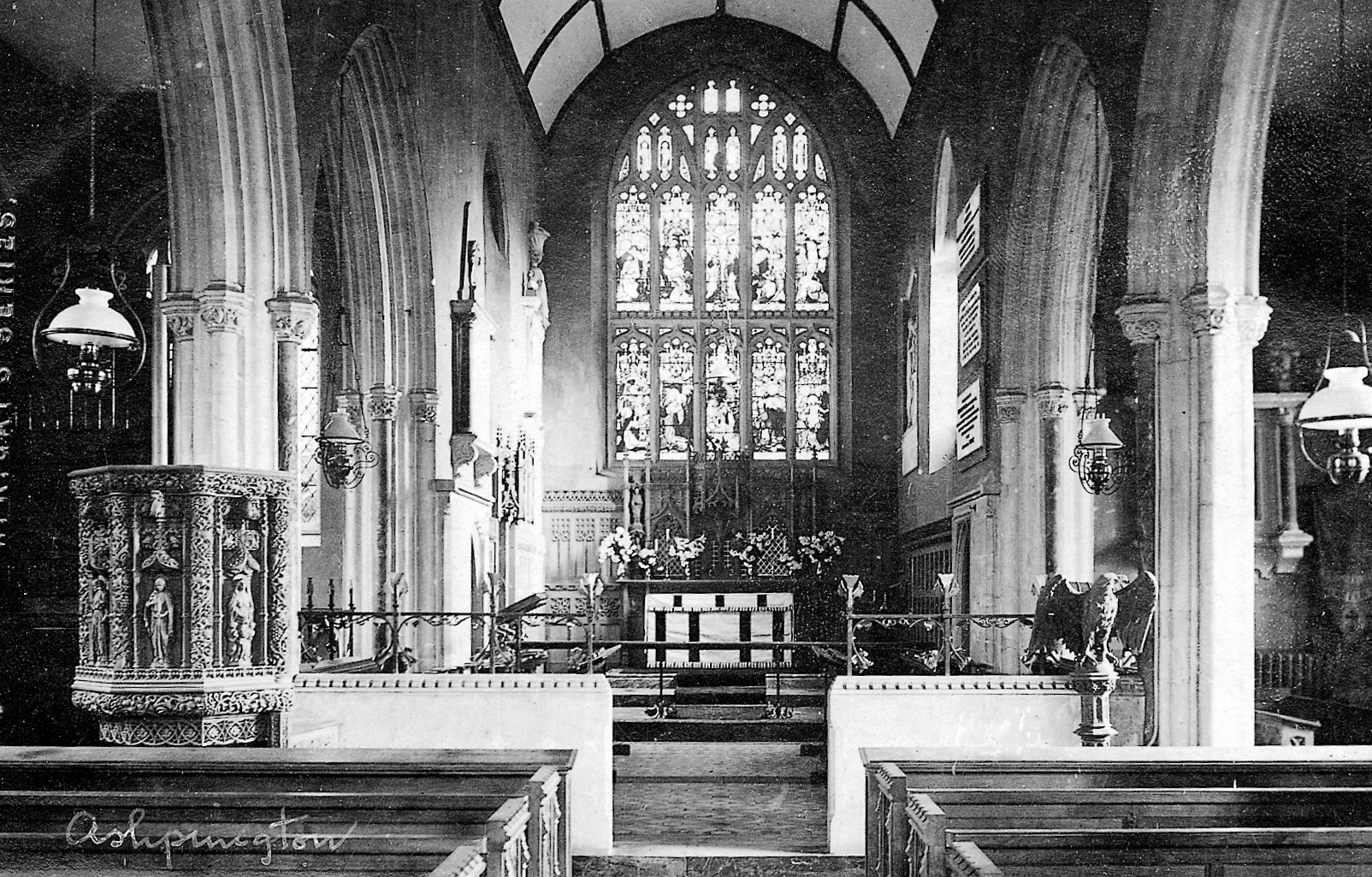 The royal arms which were recently restored and placed over the south door date from 1750 and were probably once mounted on top of the screen.  When the screen was removed the royal arms were placed above the tower arch forty feet above the floor of the nave where they could hardly be seen.

The tower was repointed with lime mortar in 2009, a project that took almost a year.  The spaces between the inner and outer walls were filled with lime slurry to discourage the formation of reservoirs of water which formerly ran down the inner tower walls.

The silver gilt chalice is used on a regular basis.  Dating from around 1250 it is by far the oldest chalice in use in the country and is kept securely in a secret location.

Since the first priest was inducted in 1260 the people of Ashprington have worshipped God in various ways within the walls of St David’s Church.  Today it has very much fallen to the churchwardens and congregation to support the restoration of the building and pass it down to future generations.